Solar has not beaten coal in the race to electrify India 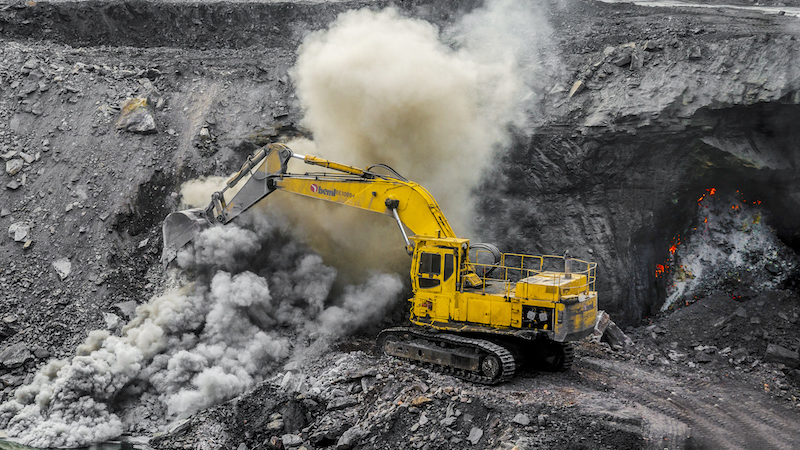 By Aditi Roy Ghatak
Those ready to crown solar energy as the victor in the race to electrify India, attend. More efficient coal plants will hugely undercut renewable energy prices in the coming years, creating vast new demand for the most-polluting fossil fuel, a former chairman of Coal India has said.

International interest in Indian coal has been fierce ever since the realisation that the nation’s reliance on coal-driven energy infrastructure and its unacceptable emissions would make nonsense of the international determination to bring greenhouse gas emissions under control.

The target of avoiding 1.5C of mean global warming shall go awry unless India finds another, cleaner way to provide power to at least 500 million people who have zero to scant access to energy (304 million without any at all) in a developing country of 1.2 billion.

Because of this, the plunging price of solar power and the news that India’s electricity authority sees no need for new coal plants until at least 2027 has generated excited headlines. “India, Once a Coal Goliath, Is Fast Turning Green,” said the New York Times last month.

In an interview with Climate Home, the former chair of the state-owned coal monopoly Partha Bhattacharya, a serious thinker in the energy space, agreed that solar has emerged as a major competitor to those wanting to build new coal plants.

“The low tariff bids on solar power (most recently Rs 2.44/kwh) raises question marks on the feasibility of new coal-based power capacity.” However, he says, “this fails to take into account the enormous scope and ample technology that can take the average plant load factor of coal-based power plants… to far more respectable levels”.

Plant load factor (PLF) is the ratio between the actual power generation and the possible generation if the plant works at its rated capacity; essentially the efficiency of operations. Currently India’s coal plants are running at around 60%. Old inefficient capacities are being phased out and a “sustained demand growth for thermal power and coal can arise following from attaining average PLF of 85%. That is well within the realms of possibility”, says Bhattacharya.

The economics is simple: improving PLF of coal-based power plants from 60% to 85% could generate about 40% more power. That means a potential 400bn units of additional coal power that will entail only the variable cost of fuel, which is measurably cheaper than the latest solar power bids by about Rs 0.6-1/kwh.

“Such infusion of 400bn units of additional power will be at a marginal cost, lower than the renewable energy bid tariff, helping [state power companies] lower their cost of procurement relative to renewables”, explains Bhattacharya. This itself would create an additional coal demand of some 250 million tonnes per annum (in 2016 nationwide consumption was 832Mt) to enable the coal sector to sustain its growth momentum.

In other words, don’t read too much into cancellations of new coal plants; coal still has a competitive edge.

This is one of several reasons New Delhi continues to unambiguously back a huge expansion of coal into the future, even while enjoying tempered praise for its carbon reduction commitments to the Paris climate agreement struck at COP21 in 2015.

Bhattacharya provides perspective. Unlike most other large economies, India’s Paris pledge was tied to GDP. “Assuming an average annual GDP growth of 7%, the 2030 GDP will be 5.8 times 2005 GDP. Thus fossil fuel consumption growth allowable in line with INDC at COP21 is 3.9 times. Applying that factor on coal permits consumption of 1.5 billion tonnes per annum by 2030,” he says. An INDC, or intended nationally determined contribution, is the term for pledges made to the Paris agreement.

According to projections from the Niti Aayog, the government of India’s planning body, India’s coal-based power generation capacity (125 GW in 2012; 192 GW in 2017) will probably rise to more than 330-441 GW by 2040 – confirming the continued dominance of coal in India’s energy infrastructure. The amount of coal burned each year is projected to nearly double in absolute terms by 2040.

Power, significantly, is not the only claimant for coal; India’s massively expanding manufacturing sector (a darling of prime minister Narendra Modi) needs coal as well. Alongside is New Delhi’s envisaged near double-digit growth over the next quarter century with rapid urbanisation. 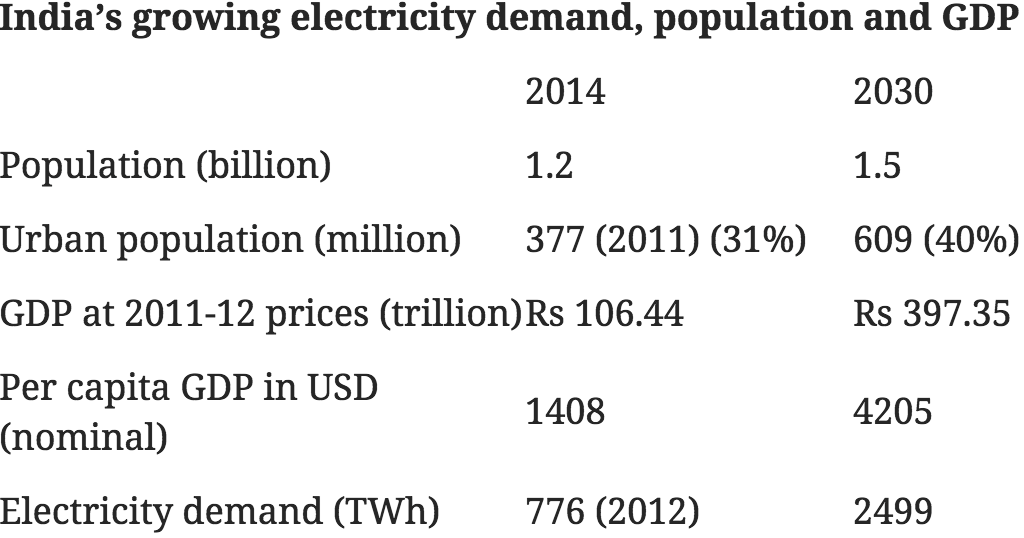 The current government has offered consistent, full-throated backing for coal. Narendra Taneja, the key energy policy architect for the ruling Bharatiya Janata Party, said in 2015 that coal and gas will remain the mainstay of the country’s economy for the next 50-60 years.

In April, power minister Piyush Goyal told parliament coal “will remain and to continue to remain our mainstay and there was no such agreement in Paris that will stop us from continuing to encourage coal-based generation of power”.

India is amongst the world’s lowest per capita energy users, which New Delhi seeks to remedy quickly; rightfully so. Before the Paris deal was struck in 2015, then-environment minister Prakash Jadavekar said: “We need carbon space, please vacate the carbon space, which countries have occupied… We want free carbon space where our development can be parked. We want to bring [poor people] out of poverty… And to that end, we’ll produce more energy.”

India claims leeway in that its per capita emissions are much lower than those of China or the US. Indian politicians point out that China fully-exploited the low cost, coal-driven development path, taking its per capita energy consumption to the global average. “In contrast, India is at a third of China and has a long way to go. It should, therefore, exploit its coal based development potential to the maximum, of course within the ceiling adopted as INDCs in COP21”, says Bhattacharya.

Treating the current pledge as a ceiling is fraught with serious consequences though. An analysis of India’s INDC by Climate Action Tracker found that India’s INDC, as it stands, was insufficient to guard against warming of 2C, let alone the tougher goal of 1.5C outlined in the Paris deal. Most countries are expected to improve their pledges in coming years.

According to Research and Markets’ latest analysis, India’s energy consumption driven by its huge population and economic growth may well overtake the OECD and Europe combined and approach the US by 2040. That’s the bottom line. A modelling exercise by India’s energy planning panel suggests the country’s energy demand will increase by 2.7-3.2 times between 2012 and 2040, with the electricity component itself rising 4.5 fold.

All this translates into a humungous demand for power and thermal power continues to be the cheapest option – notwithstanding rapid strides in solar energy, other renewables and nuclear power.

India’s position on reducing overall emission intensity and improving energy efficiency of its economy over time is subservient to what the INDC calls “protecting the vulnerable sectors of economy and segments of our society”. And there lies the rub.

There is also the question of an enormous ‘vested’ investment in the coal economy by trade and industry that will find it difficult to let go of the coal raj. Climate justice is far removed from their hearts and minds. It is the same with a government that derives enormous revenues from auctioning off coal mining blocks. The first two rounds of auctions in 2015 yielded more than Rs 200,000 crore ($32bn), the coal secretary announced in March 2015. According to the government, at least 25 coal mines will be auctioned in 2017-18. Reports say 222 mineral blocks are on radar for auctions in 2017-18 at the state level.

India’s energy regime will thus be determined by convenience and affordability. Coal has enormous supporting infrastructure and coa-based power is relatively inexpensive given substantial national coal reserves. That its production is fraught with environmental and health hazards is something easily overlooked in India, where the focus is on electrification across the country.

So much for bidding adieu to coal.