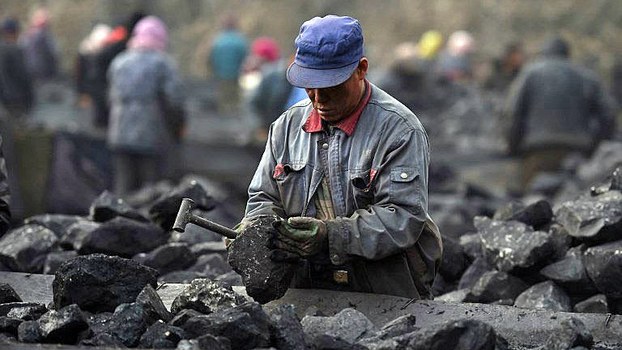 A Chinese worker sorts coal on a conveyor belt near a coal mine in Datong, northern China's Shanxi province, Nov. 20, 2015.
As China scales back plans to build new coal-fired power plants for its domestic market, it is adding dozens more to the world total with similar projects abroad, environmental monitors say.

The building binge of overseas projects threatens to offset the environmental benefits from curbing expansion of coal power at home, according to recent reports.

As the world's biggest carbon emitter, China is also the leading contributor to the boom in new coal power projects in developing countries.

According to a report by the Berlin-based environmental group Urgewald, some 1,500 new projects are planned by many countries at 850 locations around the world, boosting generating capacity by 43 percent.

Taken together, Chinese companies and investors represent the biggest source.

"The fleet of new coal plants would make it virtually impossible to meet the goals set in the Paris climate accord," The New York Times said in a July 1 report.

China won praise from environmental groups in January after the National Energy Administration (NEA) announced the suspension of 103 planned coal power projects in 13 provinces, including some already under construction.

The cutback came after Greenpeace East Asia warned in late 2015 that China's environmental authorities had approved plans for some 155 new coal plants despite utilization rates that had already dropped to the lowest level in 37 years.

The Urgewald report, based on data from the Global Coal Plant Tracker at http://endcoal.org/tracker/, suggests that the numbers of China's new projects internationally could be far greater.

Chinese companies are either building or planning more than 700 coal power units with about one-fifth of the capacity abroad, said The Times.

China accounts for 45 percent of the projects in the database, according to Urgewald's tally.

An RFA review of the data found that 15 Chinese companies are involved in planned coal power projects in 21 foreign countries, ranging from Pakistan to Indonesia, Vietnam, Iran, Jamaica and Zimbabwe.

The lengthy list suggests that China will keep increasing its global climate footprint, even as it reduces the rate of growth of carbon emissions on its own territory.

"If the Chinese government truly wants to position itself as a global climate leader, it needs to rein in its state-owned companies that are flooding the world with new coal power plants," said Trusha Reddy, coordinator of the International Coal Network at Earthlife Africa in Johannesburg, as quoted by Urgewald.

One of the group's main complaints is that large coal-fired projects have been slated for countries like Egypt and Malawi for the first time.

"Putting new coal plants in countries that have never had any coal plants before creates coal dependencies for decades to come," the NGO said.

Big investments in the projects could force them to keep operating for 40 years or more, it said.

Beijing has promoted the concept for its industries that have vast production overcapacity like steel and building materials, giving manufacturers an incentive to close surplus plants in China while opening facilities abroad.

Critics have charged that this amounts to exporting pollution, but Chinese officials have argued that the program is intended only "to help other countries beef up their manufacturing capability."

For many of China's less developed trade partners, industrial capacity cooperation has become intertwined with China's other big overseas initiative—the "One Belt, One Road" (OBOR) program to build infrastructure and trade routes through Asia to Africa and Europe.

But the push for foreign coal-fired projects predates both OBOR and industrial capacity cooperation, said Derek Scissors, an Asia economist and resident scholar at the American Enterprise Institute in Washington.

The effort has been driven largely by China's capabilities rather than overcapacity.

"The original motive was that China built a ton of coal plants starting in 2003 and had gotten very good at it. Why not use that as a tool of foreign policy?" Scissors said.

Over time, China's promotion of coal power has found its place among its other foreign policy initiatives, like OBOR.

"The government is definitely involved, both in terms of creating a framework for SOEs to want to do this for diplomatic reasons and helping them with loans to host countries. OBOR just adds a public relations exercise," Scissors said.

Regardless of the rationale, environmental advocates are focused on the consequences of starting hundreds of new coal power projects in developing countries.

Urgewald has called for divestment and blacklisting of companies and financing sources that support the coal projects.

It is unclear whether such opposition will have an effect on China's SOEs with their backing from state bank financing, but the report could damage China's image as a leader in the campaign against climate change.

The proliferation of Chinese coal power projects has been part and parcel of its growing influence around the world.

But the thrust into foreign markets for coal-fired generation also goes against the grain of China's own environmental policies.

"With a 25-percent decline in the commissioning of new coal-fired power plants, China's energy investment is increasingly driven by low-carbon electricity supply and networks, and energy efficiency," the International Energy Agency (IEA) said in its World Energy Investment 2017 report this month.

According to the Paris-based IEA, China continued as the world's largest destination of energy investment, accounting for 21 percent of the global total.

At a prerelease press conference for the study, IEA officials were asked about the impact of China's investments in coal power overseas.

In response to a question from RFA, IEA energy investment analyst Michael Waldron cited "emerging overcapacity" among Chinese power companies as a result of the decline in final investment decisions for domestic coal projects.

So far, the effects of the overseas projects have not outweighed the benefits of suspending the planned projects at home, Waldron indicated.

"The decline in final investment decisions in China is not being made up for on a one-for-one basis by an increase of Chinese investments in coal power in some other parts of the world," said Waldron.

"But indeed, there are some Chinese companies that are undertaking and are looking increasingly to do investments in other parts of the world," he said.