First New Coal Mine of Trump Era Opens in Pennsylvania 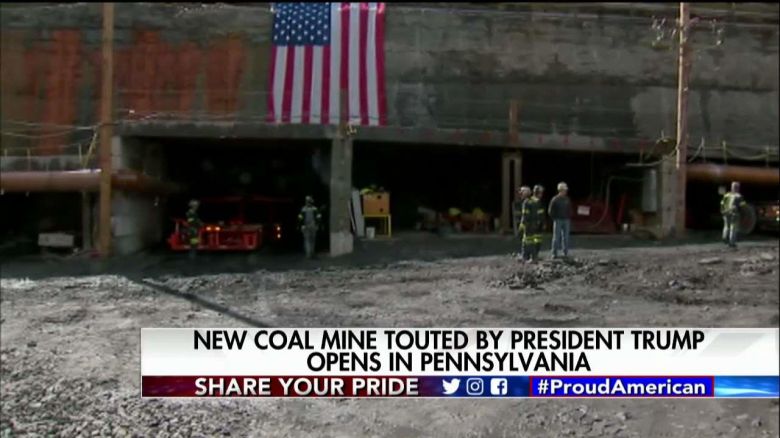 President Trump lauded the opening of the nation's first new coal mine in recent memory.
Corsa Coal Company will operate the mine in Somerset County, Pa. - outside of Pittsburgh.
Corsa CEO George Dethlefsen said the mine will be a boon to the struggling local economy.
He praised Trump's easing of regulations and encouragement for fossil fuel exploration.
Democrats Raise Eyebrows With Foul-Mouthed Rhetoric
Judge Nap: Sessions Is in a 'Dangerous Position,' Should Not Testify
Conway: 'The Democrats Are Guilty of Obstruction of Progress'
Dethlefsen told Leland Vittert that for the 70 positions available in the mine, 400 people applied.
"It's a hard day's work every day, but it's worth it," one miner said.
Vittert said the news contrasts with Hillary Clinton's message that she would "put a lot of coal miners out of work."
Pennsylvania Gov. Tom Wolf (D), who endorsed Clinton, joined the mine company in watching a video message from Trump commemorating the occasion.
Pierson: Comey's Testimony 'Exposed Problems in the Deep State'
Group with Reid, Clinton Ties Accused of Faking Voter Registration Forms
NYC Play Appears to Depict Assassination of Trump
R.J. Harris, a longtime host on Harrisburg's 580-WHP, said the mine opening is a "shot in the arm" for the Keystone economy.
Pennsylvania was once home to the world's largest coal breaker, the St. Nicholas Breaker in Mahanoy City.
In its heyday, the breaker could process 12,000 tons of anthracite coal each day, according to the Allentown Morning Call.
Demolition began on the Schuylkill County behemoth in 2015 - a sign of the times in the coal region.

Harris said he is optimistic that Corsa's mine opening is evidence that Trump can help turn the region's economy around.

The mine will reportedly be producing metallurgical or bituminous coal - which is used in steel-making - while anthracite is the type often used in energy production.

Watch the report above.
'Trump's Tough Talk': Illegal Border Crossings Down 64 Percent Vs 2016
Bongino: 'The Left Has Gone Mad With Rage'
Sen. Gillibrand Slams Trump: 'Has He Kept Any of These Promises? No, F*** No'
Reporter Calls Comey's Father for Scoop, Gets Quite a Surprise